A lot of positives to report this week, many of them being figured out today. As this is my journal as well I’ll try to keep the notes brief.

Right nuc – When I checked this hive out earlier this week, the queen still wasn’t doing much. A few queen cups and a few eggs laid, but still not getting over the swarming urge.

Middle nuc – This hive was still working on making a queen, with a few queen cups still waiting to be queens.

I went in today to check it and it nearly bit my head off. Wasn’t even able to pull out a frame!

Left nuc – This hive has a queen who is doing quite well. Also seemed a bit aggressive today. 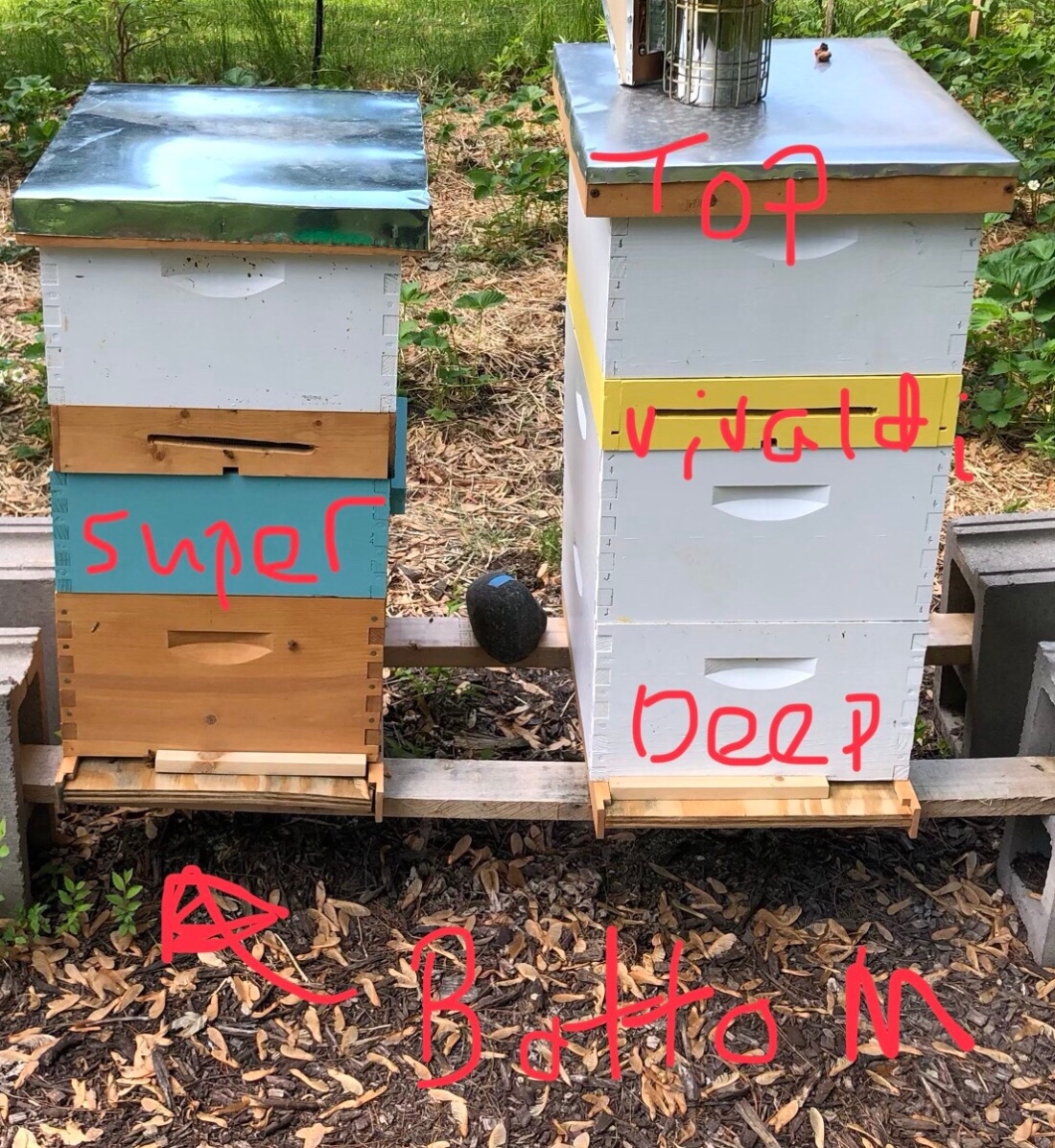 Right hive – This was the hive that I brought to school in my observation hive. While there, a student Called the Queen Elizabeth, but until recently, she hadn’t earned the name. I must say, she officially has. She continues to lead my best at-home hive, pumping out multiple frames of capped brood in the bottom box and multiple frames of eggs on the top. I continue to use her frames of eggs as resources for other hives. I added two honey supers on in hopes the sheer amount of bees will need the room and make some honey!

Hive Left – After the original queen continued to try to swarm, I put her in what is now the right nuc and let them try to make their own queen. A week and a half ago I found this, an empty queen cup. 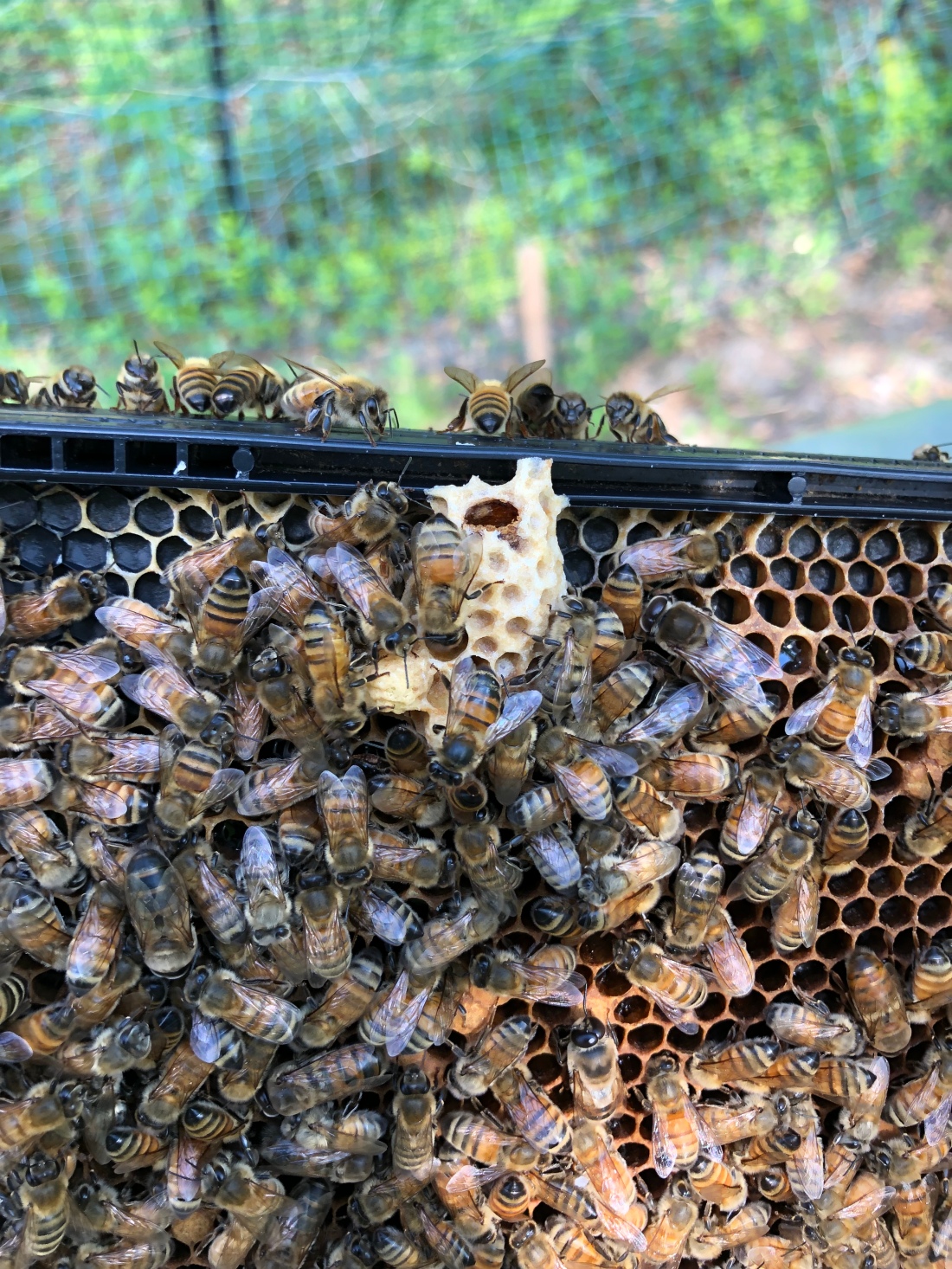 This last week I went in to see if there was a queen or a sign of a queen. Initially I didn’t see eggs or brood, but I did see a virgin queen (I knew she was virgin because she wasn’t nearly as long as a normal queen). I ran into my garage to get out my queen marking gear in hopes of getting her marked so she’d be easier to find moving forward. This was not wise, as once I tried catching her in the cage, she flew off of the frame and landed somewhere near the hive. After looking, I finally found her on a frame outside the hive. After trying to catch her again, she flew up and disappeared. 😬

The last thing I wanted was to get this far and have nothing to show for it, so I closed up the hive in hopes of her coming back.

Tuesday I checked the hive again and found eggs and larve, but still no queen. Progress, but hopefully not a laying worker!

Today, when checking the hive again, I found this…

My first ever queen born and mates in Shoreview!!!!! Now mates, she was big and not mobile, so I was able to mark her an return her to the hive. I now have 4/5 hives in my yard which are queenright.

Other quick updates: Beeyoncè is slowing down a bit with quite a few queen cups, the Oak Grove hive right is doing fine and aggressive hive left is still taking a break, hopefully making a queen of their own.

That leads me to this… 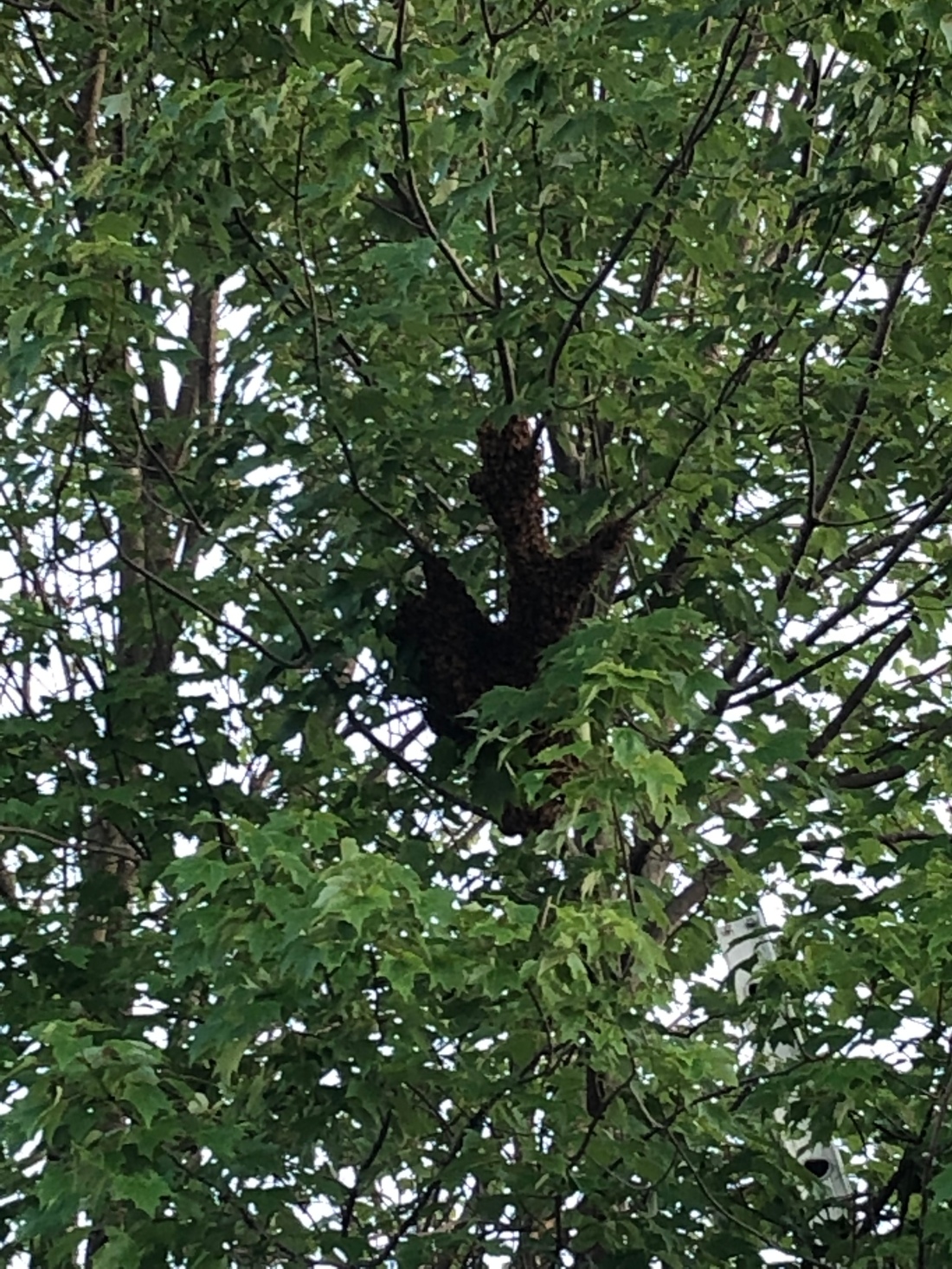 Whole at an open house for a side job, I received a text from my dad that a neighbor spotted a swarm in their tree. Excited and nervous, I rushed home when I was done to see this wasn’t going to be easy.

It was already about 8:30, so I climbed the ladder and got to work. 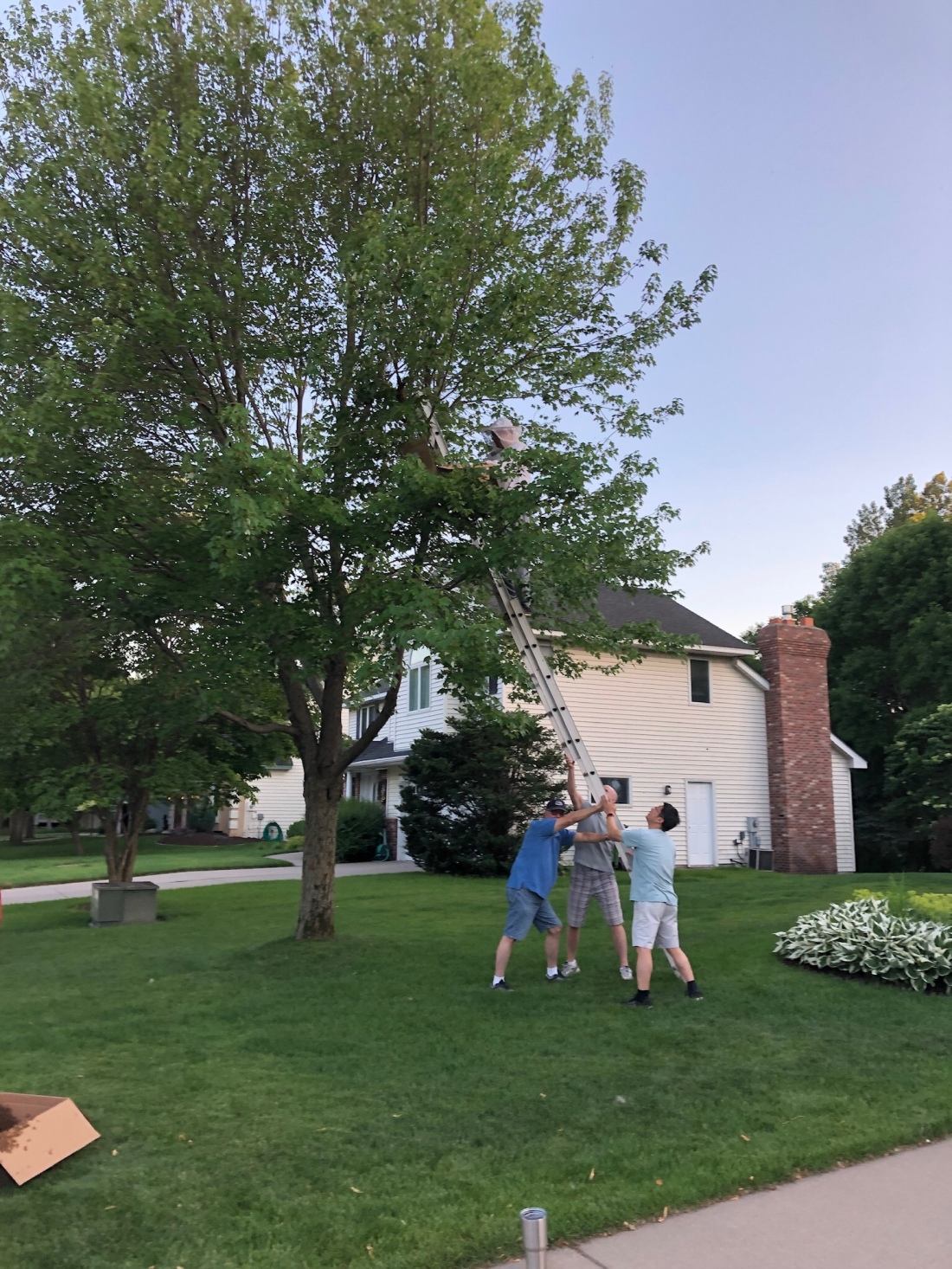 After getting the rest down from the branch a second time, I brought them to my backyard to put them into a new hive. 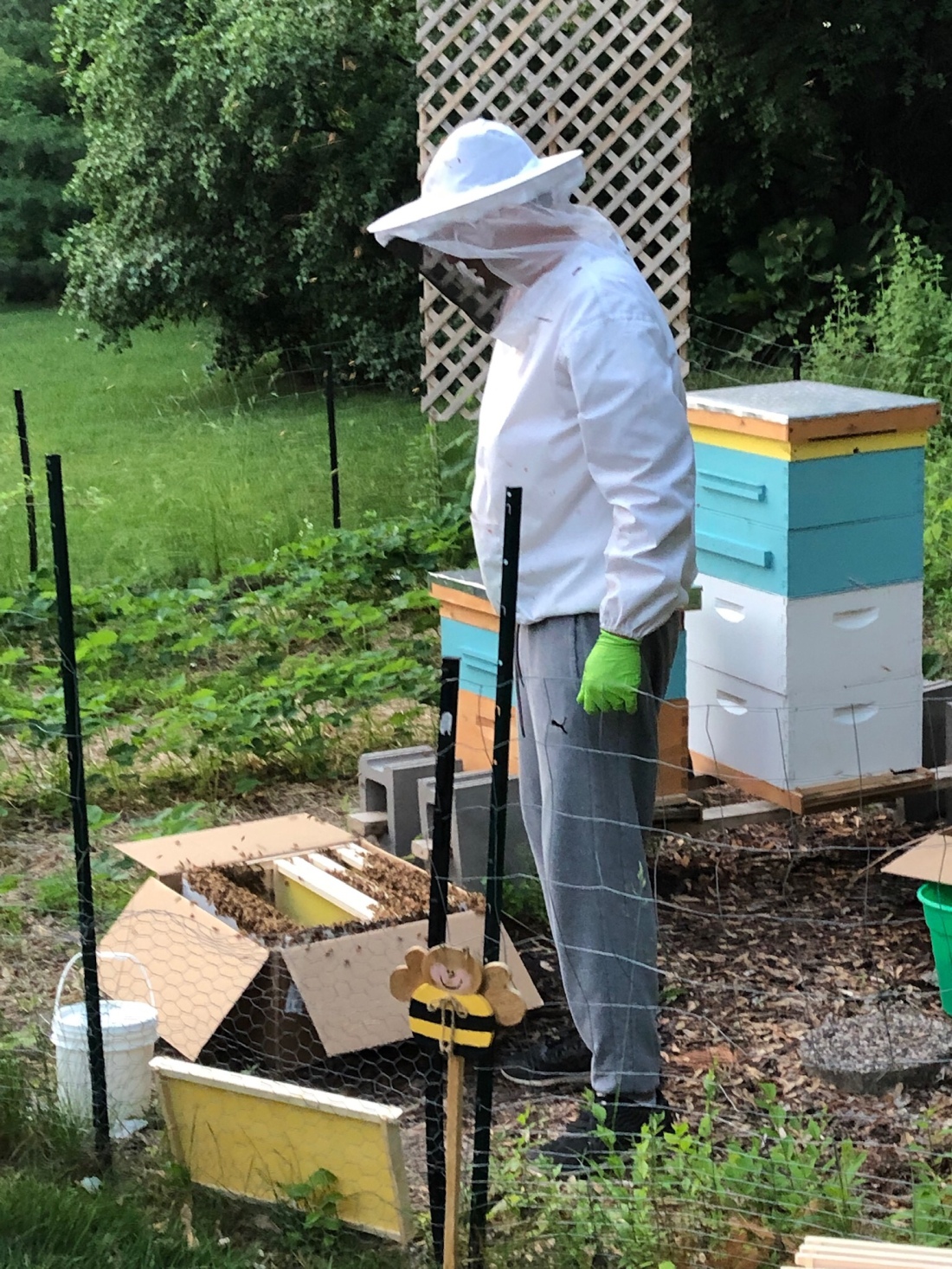 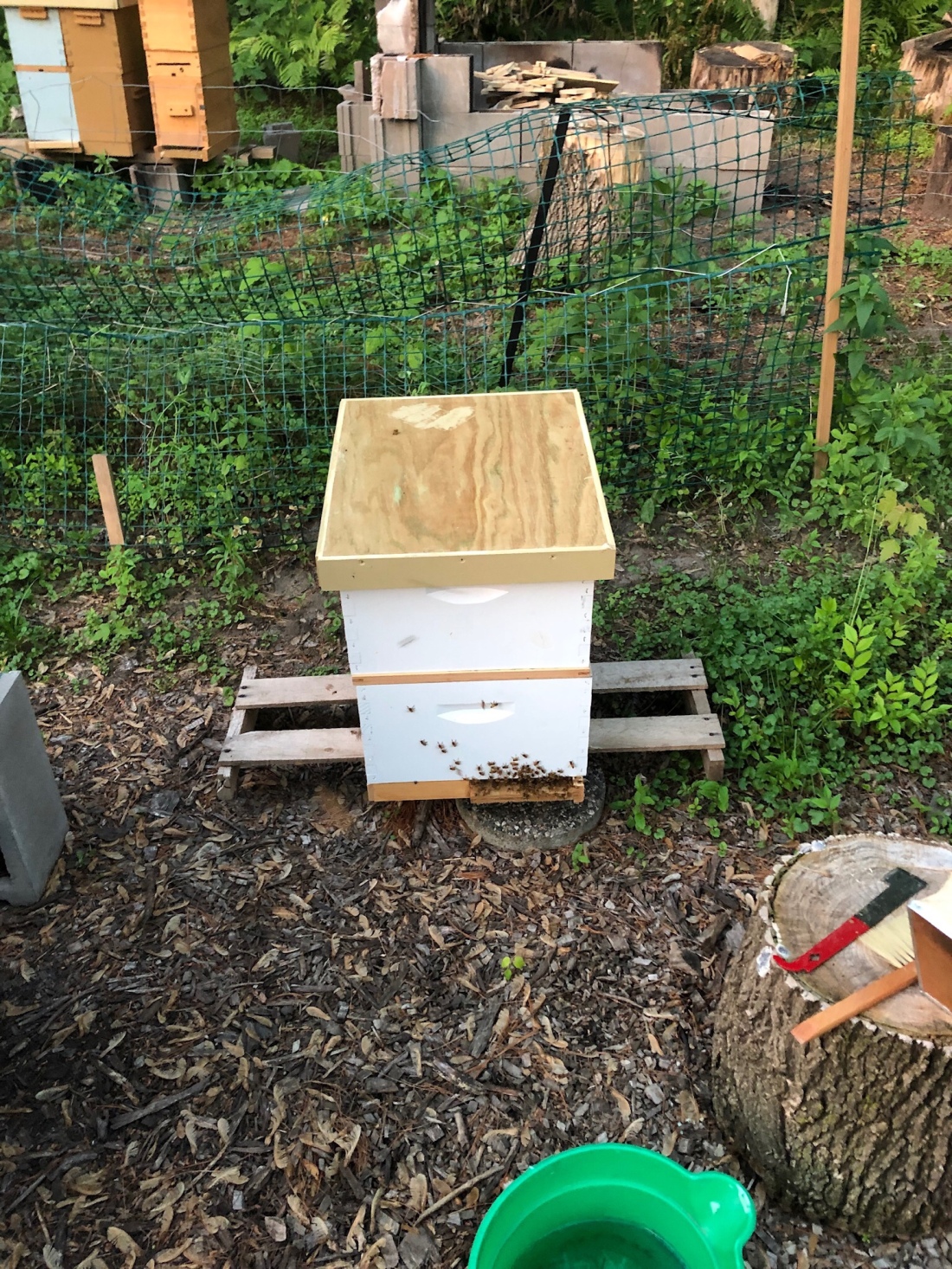 So, the question that I was wondering since I got that text was “Whose bees were they?” After all of my work to destroy queen cups, did one of my hives swarm?

Today I checked all of the hives and all of them seemed just as full as before! The swarm was either wild bees or someone else’s hive. I had successfully caught my first swarm and added another hive to my apiary.

In checking them today for a queen, they had begun drawing out many of the frames and may be preparing for the queen to lay. I wasn’t able to see her today, but hope to find evidence of her next week when I check.

Two firsts this week: making my first laying queen in Shoreview and catching a swarm. I love beekeeping!!!

View all posts by Tracy Pluim